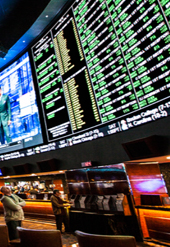 HARRISBURG, Pa. – The addition of two casinos and a turf club in the month of January has the total handle for sports bets in Pennsylvania nearly doubled.

The Pennsylvania Gaming Control Board released their January Sports Wagering Report on Friday, which recorded the handle, revenue, and tax contributions for all six up and running sportsbooks in the state.

The report pulls from the previously established Hollywood Casino at Penn National in Dauphin, Rivers Casino in Pittsburgh, and Sugarhouse Casino in Philadelphia. It also includes the partial operating months of Parx Casino, South Philadelphia Turf Club, and Harrah’s all of which are located in or outside of Philadelphia.

Breaking Down The Revenue and Sports Betting Numbers

Though the handle doubled, the gross revenue increased by roughly 30%. December saw its revenue just over $2 million while January is listed at just over $2.6 million.

This indicates that the state is winning and creating revenue but at a lower rate than in previous months. Either way, the 34% tax contribution from the books to the state was just under $900,000 for the month.

Total state tax contributions from November through January are just shy of $1.75 million. This number should rapidly as February will be the first month of having every sportsbook reporting for the full month.

Sports Betting By The Book

Sugarhouse Casino notched the highest handle for January, bringing in $10.8 million; however, they also earned the second-least gross revenue. Gamblers at Sugarhouse only allowed the casino to keep 9.5% of the handle as they took home over $10.7 million of the handle.

Sugarhouse is hoping for new clientele in February – perhaps the ones who ventured to Parx Casino after its January 10 opening. The Bucks County casino noted the third highest handle even though only being in operation for 2/3 of the month. However, of its nearly $5.4 million handle, the casino took in a revenue of over $1.1 million.

Not only was this the highest gross revenue number for the month for sports betting in Pennsylvania, but it was nearly half of the entire industry’s monthly gross revenue.

Also, it happened at a rate of 21.7% which means that much of every dollar wagered was chalked up as a loss for the gamblers.

For reference, Harrah’s revenue rate was the second-highest at 16.8% followed by the South Philadelphia Turf Club at 10.7%. It is not usual to see a percentage that high as the established Penn National was only at 5.9%.

Rivers Casino brought in the second most handle and gross revenue at $9.5 million and $850,000, respectively.

Penn National was the only sportsbook that saw a decrease in handle from December to January. Rivers and Sugarhouse casinos saw their handle nearly double in that same timeframe while Penn National only slightly declined.

It is believed that the handle will only slightly increase or remain the same until the state can develop a mobile betting platform that can be accessed all over the state.

Currently, there are no bills filed or discussions to do so, but it would provide an outlet for those located away from the main cities of the state.